Sunday I have absolutely no legs for climbing after leaving the Hilltop motel. Could be the beers with the war veterans, could be the 170km climbing day before, the heat already noticeable, all I know is I use any excuse to take a break.

First is just after few km, breakfast at a gas station that also has some sort of tavern. Some funky characters here quickly take note of my presence and start asking me the usual questions. For some reason they are terribly amused by my answers but I can barely understand what they are saying. However they are allright and I don't want to spoil the fun, so I just go along. A big guy in overalls and camouflage hat makes fun of another skinny one with huge glass lenses that has he goes to church to pick up girls. They're quite funny and can locate Romania somewhere between Germany and Malaesia, and by the way they ask me about that plane :)

Second break comes very appropriately at Breaks Park, "the Grand Canyon of the South". After paying the 2 dollar entrance I bike through the parks asphalted paths wishing for a mountain bike to ride the numerous trails that for sure can give me a better view of the canyon areas. I reach a few so called overlooks but I can't see much canyon because of the trees. At least here on top of a hill I get cell coverage and can make a quick call home.

I enter Kentucky alternating winding roads and some highways through the forested hills, not much traffic, beautiful day, hotter than the previous ones.

In the evening when I was almost in Whitesburg to end the day, an interesting character pulls the car over next to me as I was resting a bit on the highway shoulder. About 60, white beard, pony tail, he reccomends himself as Spud, says he works in tourism and suggests that I save motel money and go to a friend of his, Jim Webb that runs a Green Peace camp up a hill I would have to climb. Spud was a Harley rider all his life so he feels a kinship with byciclists because we both "face the elements" but pities us for having to pedal up hill. He's a little wacky, just had a drink or both. Tries to show me the place on the phone map but after struggling a few minutes he quits and shows me a picture of a naked Kentucky beauty instead. He also pulls out his tobacco yellow tongue at me Prodigy style. I tell him I'm married and get another pitiful look. Anyway I manage to get a phone number for that Green Peace place but it turns out to be wrong, so its Whitesburg motel after all tonight.
Before leaving Spud also mentioned I should see the "famous motherfuckin' Harlan" and leaves me wondering what is there to see but it's not on my route so I just drop it.

In Whitesville I buy some vitamins because my diet of burgers, fries, pizza and other not so nutritious but easy to get foods is clearly lacking.

Next day is truck Monday. I grind my teeth and sometime switch on the gravel side of the road when these monsters pass by. Amazing power these things have, they go faster than cars. Road looks a bit like Valea Oltului, and occasionally cuts through layers of stone.
McDonalds proves to be again a place of cultural exchange in Hazard where I talk to a nice coal miner and learn that you used to make some money from coal around here, but not now as the government doesn't give extraction permits anymore.
He tells me it's because of the pollution and the miner health issues, and although he's life is affected by it, he seems to accept these reasons. Also says the president is not getting any votes from Kentucky so that's why not much is being done to improve things in the area.

Tuesday the hills become smaller but still consistent climbs. It's 30 degrees and some little towns I pass through don't even have a store. In an isolated area I ran out of water but found a half full bottle of gatorade by the side of the road (grose, I know) and I resolve to carry more water from now on.
It's a real Harley cult here in Kentucky. Many thunder by and look very alike, white beard, no sleeve shirt, long hair. And they have a way of saluting by very slowly raising the hand, it's like they're in some kind of zen trance :)

In Bucholn, a three house town but with a store, the old man at the counter shows me a registry signed by all the passing cyclists that stop by. Last guy was a belgian, 10 days ago, going from Miami to Vancouver. He does not remember meeting a Romanian so far, but said he has another registry with more than 3000 names in it.

Tuesday evening I find a very interesting B&B to sleep caled Linda's Victorian Rose. Linda's the owner, her husband passed away. She has this amazing garden and guest house which she lets me have 40 bucks (this is usually what I have to pay for the cheapest motel room), special price for cyclists.
She even takes me with the car to the grocery store back in town so I don't have to climb again a big hill.
In the car I remember about Harlan county that Spud mentioned and ask her what is there to see. She says "Bloody Harlan? ... nothing", laughs and continues something about people having guns, then says "heck, even I got one" and pulls up a revolver from the door pocket. "You can carry a gun around here but you have to keep it in plain sight, concealing it is not permitted". But despite the guns she says there's very little crime and laughs that people don't steal or shoot you if they know you can shoot back. Charming lady! 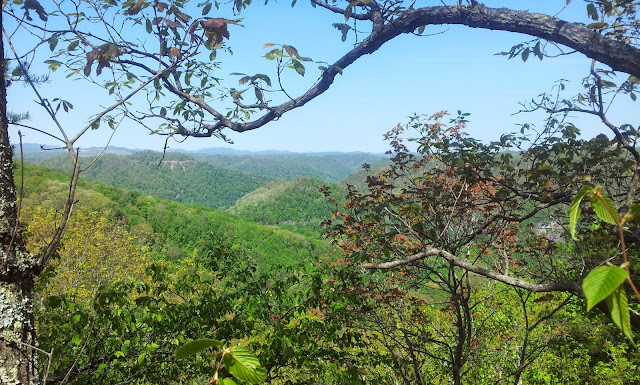 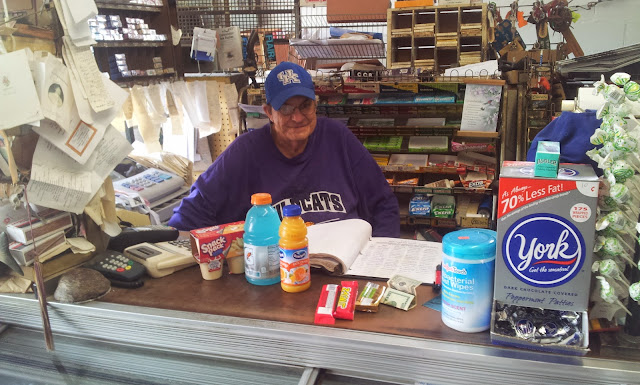 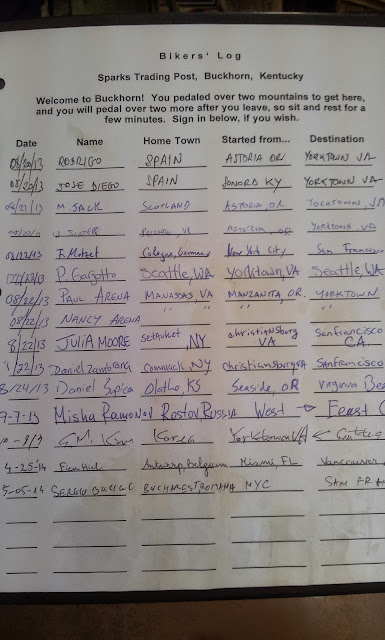 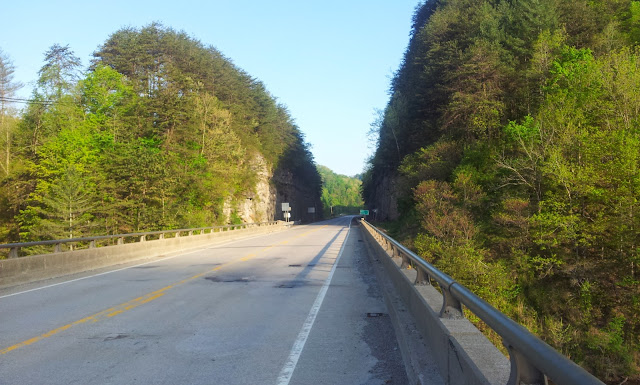 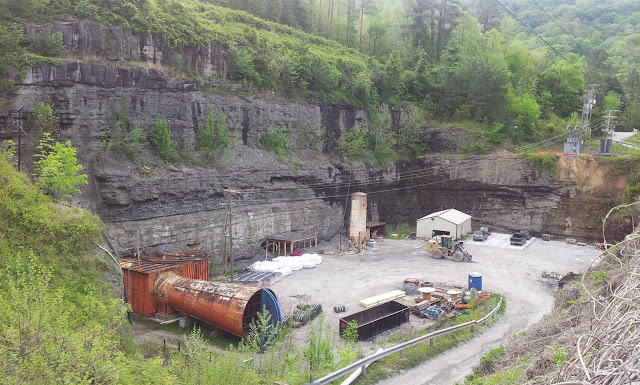 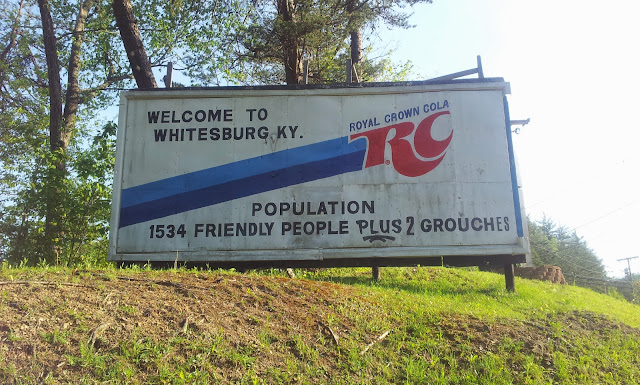 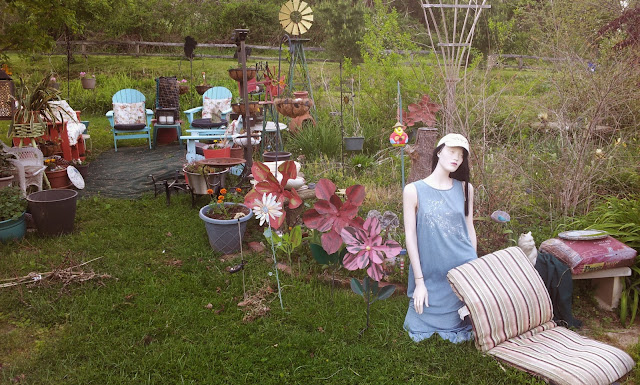 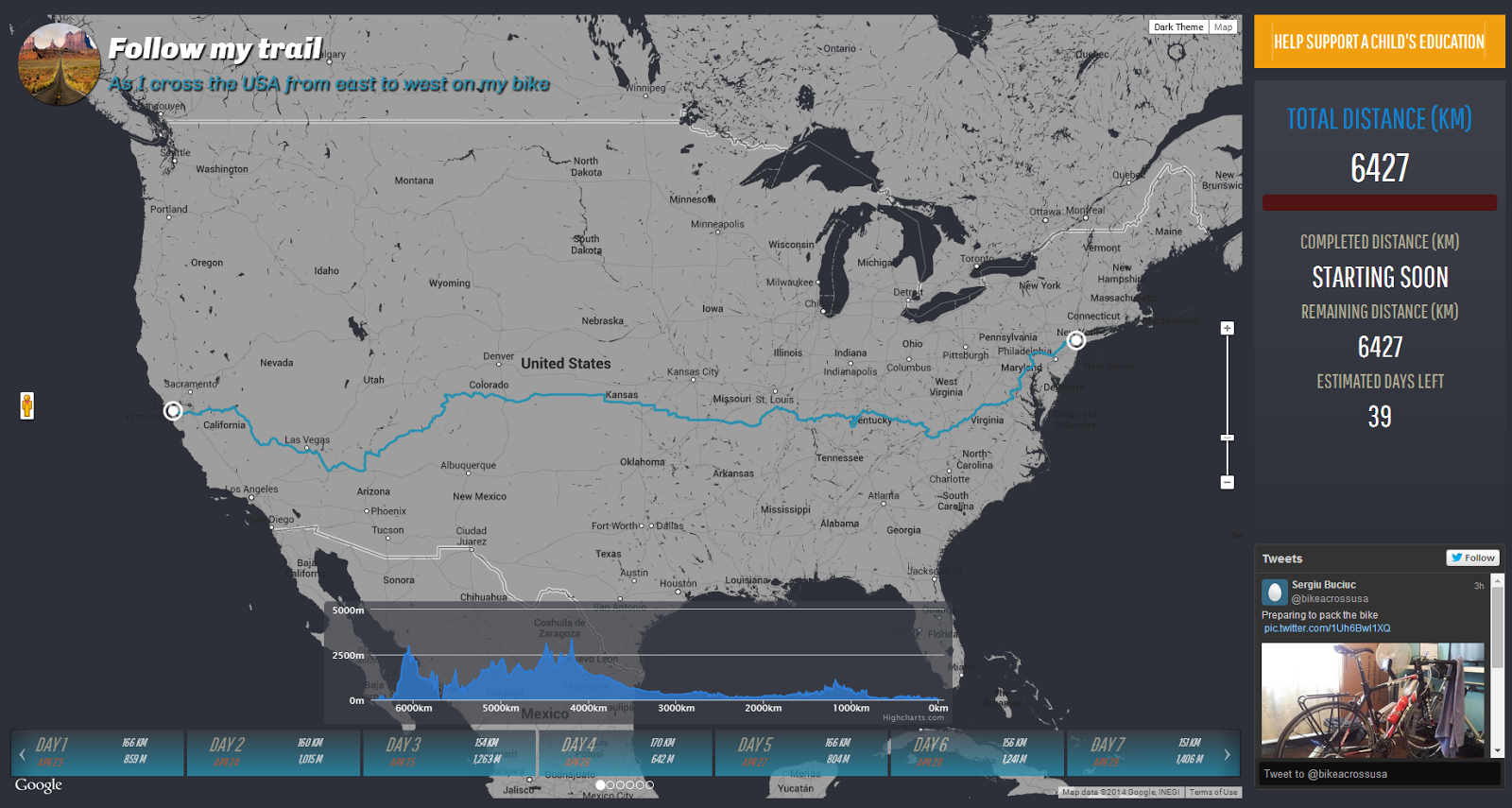